In 1905 Dr. William Osler – the great co-founder of Johns Hopkins Hospital, who was cursed with a terrific sense of humor – jokingly proposed that all men over age 60 should be euthanized. Unfortunately for Osler, the newspapers took him seriously. A gigantic controversy erupted, and Osler spent the rest of his time in America trying to explain himself, before fleeing to Oxford.

Being a man not far from the aforementioned age, let me be clear: I do not support any form of mandatory euthanasia as a method of reducing physician workload. There are much better ways.

I think that physicians should do only physicianing. The trends in medicine, however, are exactly the opposite: physicians are wasting increasing amounts of time doing un-physiciany things. They are being de-professionalized. 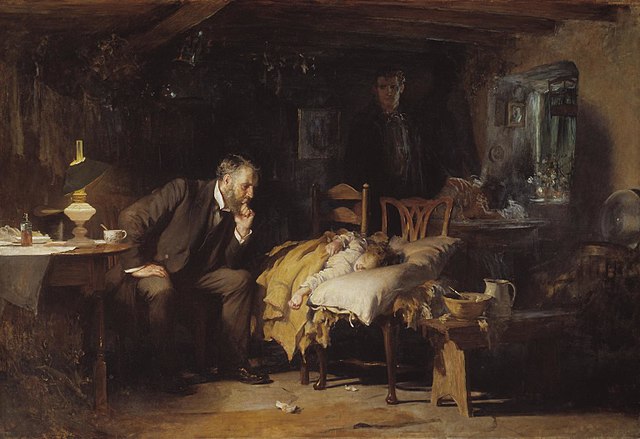 The painting, titled “The Doctor,” appeared in 1891. The sick child commands every ounce of the doctor’s attention and concentration. The drawing, untitled, appeared in 2012. The sick child, who is also the artist, sits on an examination table, amid family. The physician is at the left margin, his head down, the hospital information system commanding every ounce of his attention and concentration.

If you talk to physicians today, every single one of them will begrudge the time they spend feeding the gaping, information-eating maw of insurers and medicine-practiced-by-teams. Some may admit there are benefits, but every single one will talk about the costs, which are all too obvious.

If Dr. Leonard “Bones” McCoy were among us, he would rightly and indignantly remind Captain Kirk that, dammit, he’s a doctor, not a stenographer.

Biotechnology and the Lifetime of Technical Civilizations

When will human civilization end?I don't know the precise answer to that question (no one does), but here I'd like to share with you one ...… Continue reading

A Wiki for the Air National Guard Medical Service